Born in Barquisimeto, Edo Lara, the Musical Capital of Venezuela par excellence, a member of a family of born and academic musicians, she began her musical studies in Theory and Solfeggio at the Symphonic Orchestra of Araure, Edo. Portuguese, at 6 years of age. She studied initiation of various instruments such as the violin, the piano, the cuatro, the recorder and the guitar.

Participate in artistic activities such as theater, dance and singing, with preference in the intervention of musical activities as Singer, representing the San Vicente de Paúl School for the first time on a stage at the Primary Voice Festival with only 8 year old. In the annual competitions of Venezuelan Music Festivals that were held within the School, she was the winner of the first places in it on several occasions. In addition to being a special guest singer with the collaboration on stages in some festivals and recreational events of a public nature in the community of Acarigua - Araure. 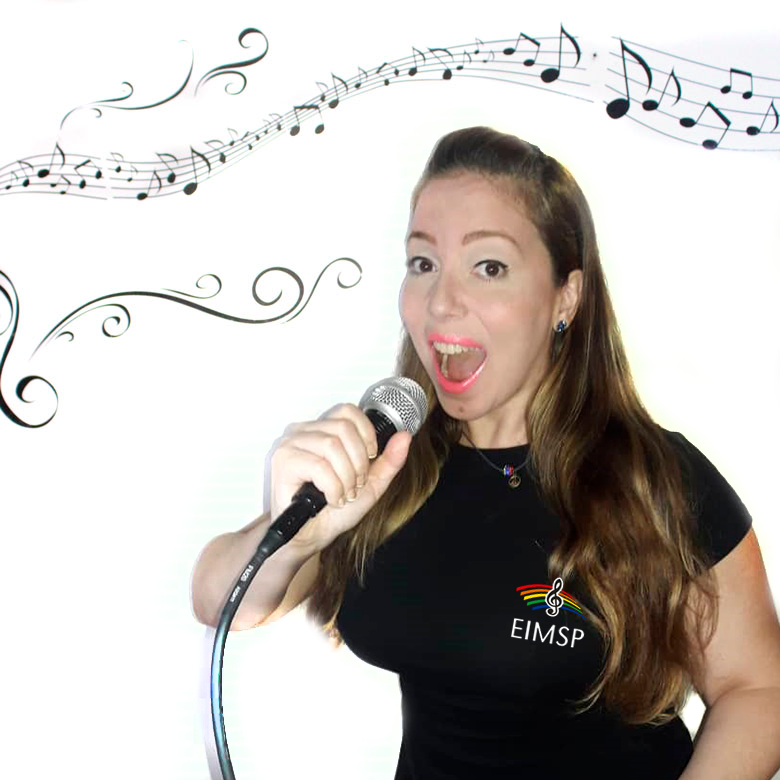 Participate as a choral singer and soloist, with traditional songs from his country Venezuela and Latin American folklore, sacred and religious music, Venezuelan Traditional Music festivals held in Lara State, such as the Vinicio Adames Festival, obtaining outstanding awards as a choral group of the IUTAJS, where she took different workshops on vocal technique and choral practice, as well as corporal expression, simultaneously, some private piano and singing classes, being a collaborator of their directors for the work of the groups, contributing her musical knowledge to the vocalization and practices of the songs to be interpreted. In 2004, she studied adult musical training at the Vicente Emilio Sojo Conservatory of Music in Barquisimeto, taking subjects such as History of Music I and II, Music Education and Vocal Training Workshops with the well-known Tenor Oswaldo Rodriguez.

Selected in the choir of Los Niños Cantores de la Orquesta Sinfónica de Lara, by Maestra Libia Gómez de Da´Donna, during the days of the International Bach Festival of Venezuela, in 2004, where she participated as a contralto as a great I challenge to learn and pronounce 42 themes of the work and in the German language, for the Eliah Work by Félix Mendlesson Barthodli, whose preparation was developed by the hand of Master Maria Guinand and Ana Maria Raga, directors of the Schola Cantorum de Caracas and Fundación Bach de Venezuela, bringing together the best choirs of the Venezuelan youth and children's choirs and orchestras system, whose instrumental performance was performed by the Simón Bolívar Symphony Orchestra and was presented at the Teresa Carreño Theater and El Aula Magna of the Central University of Venezuela , in Caracas Venezuela with the baton of the famous German Director Helmmunt Rilling.

In the city of Valencia, Edo. Carabobo, she joins the IUPSM choir, where she participated as a soloist in various festivals in Edo. Carabobo, as well as the formal acts and graduation masses of the student promotion events, with traditional Latin American songs, religious songs and hymns. She participates in the VIII Festival Voz Santiago Mariño Valencia Edo. Carabobo 2006, remaining as Winner of the 1st Place Female Voice, with the Llanerias Song, where she subsequently attends to represent the institution in the national festival in the city of San Cristóbal Edo. Táchira at the Colombia Pavilion, with an outstanding participation with the song El Arreo, both of traditional Venezuelan Creole music.

He studies Dubbing and Neutral Accent in the city of Caracas, with Prof. Sergio Pinto at the renowned international school (currently based in the city of Miami) Voces de Marca, in the original headquarters city in Caracas Venezuela, with an outstanding participation in the singing dubbing stage, she decides to audition at the academy of the renowned teacher Leisha Medina, Voicesplaces, where she is selected to study Musical Dubbing, performing Disney songs with great recognition on this occasion, where she recorded songs such as Una Vez en December of the Movie Anastasia and I'll Arrive from the Princess and The Frog.

His participation in singing stands out, in student samples With the Song of the Musical Sing "Al Fin", In Expresiones del Alma with the song of Llorona, from the COCO Movie and in December 2020 with O'Holly Night with a trio of voices with his sister Sherezade and Katherine, as well as in the choir of Silent Night and One Year More, as well as his participation with the song from the Broadway Musical Sunset Boulevard: Sin Hablar (With One Look, A. Ll.Weber), Spanish version, with a unique and original style.

"... All musical activities throughout my life were always developed with a lot of love and in principle as a hobby for me and I was always on stage and singing at family gatherings."

“… an anecdote is that when I decided to sing again I did it with great fear, however, I dared to audition for the important Musical Los Miserables in the city of Caracas, in the face of the important Argentine producer Mariano Dietry and the Director from the Gran Mariscal de Ayacucho Symphony Orchestra, Elisa Vegas at the Centro de Acción Social por la Música y las Artes, singing the song Alfonsina y El Mar a cappella, which although I was not selected, the attempt to participate there and of what I want to convey to all my classmates and students: wanting is power! ”

"Currently my dream as an artist is to become the singing voice of a Disney character and leave a musical legacy to my family and friends around the world."

"My recent achievements in vocal training have allowed me to obtain greater confidence when singing songs with a higher vocal register, as well as the improvement of the vocal technique by the hand of my sister Sherezade Perdomo, who has been my best singing teacher of